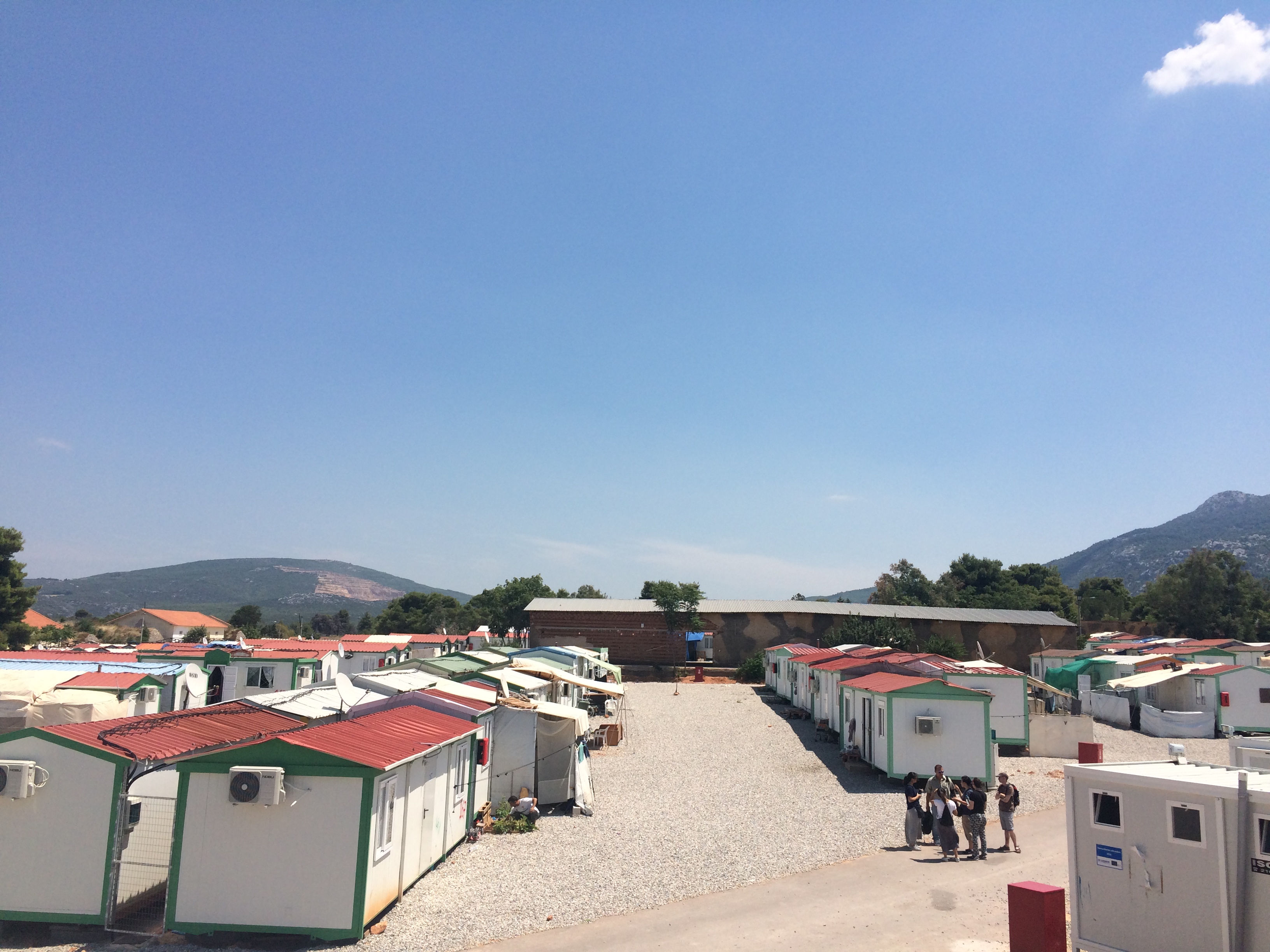 It’s been about a week since our last update…sorry we haven’t sent out an email sooner! We served at a Greek Youth Camp this past week where there was no wifi so we were unable to have access to the internet.

But let’s go back to the very beginning of the week, where we visited two refugee camps. Conditions in the refugee camps have improved significantly since a year ago in mainland Greece. They used to live in tents that were ill-equipped for harsh weather, but now they’ve transitioned to portables that have air conditioning, which is really nice since it’s about 100 degrees there.

The first refugee camp we visited was called Malakasa, which houses refugees from Afghanistan and Iran. During our time there, we met Esther who was an Iranian Christian. She welcomed all of us into her home and showed us generous hospitality, immediately offering us tea and candy. It was really encouraging for us to be able to fellowship with a fellow believer even if there were language barriers.

The second refugee camp we visited was called Ritsona, which primarily housed Syrian refugees. We learned that it’s much easier for Syrian refugees to gain resettlement in European countries than refugees from other countries, because there is an active war in Syria. Walking into this camp, we noticed that there were a lot of art murals on the walls of buildings and homes. They also had a youth center where the youth could hang out and express themselves creatively through art, music, and writing. One of the youth at the center showed us a compilation of their work and it’s difficult for us to be able to fully express our emotions and thoughts.

After visiting the two camps, we went to Sounio, which was a Greek Evangelical Christian retreat. We already had very few expectations to begin with, but all of those expectations were completely turned upside down…lol. We came to this camp to serve the Greeks by helping in the kitchen, cleaning the dining hall, and serving them food. The purpose of this was to serve and encourage the local Greek Christian community, since there are only 25,000 Greek Christians among 12 million people in Greece. Most people in Greece are culturally Greek Orthodox, but may have never touched a bible or truly understood what the gospel means. It was a very long week that came with its challenges and blessings. It was really hot the first few days and we got a lot of mosquito bites, but as the week went on, the Lord blessed us with cool wind but he FORGOT TO TAKE THE BUGS AWAY. LOL just kidding : ) Initially, it was difficult for some of us to serve joyfully, because of the physical conditions and also the cultural differences with the way they communicate and experience community. But as the week went on, God was gracious in showing each of us in different ways His purposes for bringing us here – mutual encouragement. In serving the Greeks, we were able to show brotherly love to them as one body of Christ, and in turn, we also received their love and encouragement. Although we didn’t expect to serve in this way, we are all really thankful for what God has done through this retreat. Another unexpected blessing was getting to know our OM long term team better. It was really awesome to see their hearts for the ministry in Greece and their willingness to serve however they can. We also appreciated how they really adopted us into their missionary family and actually want to get to know us, even though we are only here for three weeks.

This week, we are heading back to Omonia Church to continue doing refugee ministry!

Thank you as always for praying for us and supporting us!